Things to do in New Bern, Craven County

New Bern and Craven County offer a variety of cultural, educational and historical attractions, from a magnificent palace, to museums and even beautiful gardens. There is something for everyone to enjoy!

610 Pollock Street, New Bern, North Carolina (252) 514-4900. Known in colonial times as one of the most beautiful public buildings in America, the elegant Georgian-style mansion served as both home of Royal Governor William Tryon and the capital of the Colony of North Carolina. Restored to its 18th-century glory, Tryon Palace is furnished with an outstanding collection of antiques and art. The grounds are devoted to extensive gardens ranging from English formal gardens to a kitchen garden to wilderness garden areas. Tryon Palace includes four contrasting homes of exceptional beauty. Interpreters in period costumes conduct tours of Tryon Palace all year. An audiovisual orientation program and crafts demonstration, including cooking in the Tryon Palace kitchen, basket weaving and blacksmithing, are offered daily on the Tryon Palace grounds.

256 Middle Street, New Bern, North Carolina (252) 636-5898. On this spot in his pharmacy, Caleb Bradham invented “Brad’s Drink,” which later he patented as Pepsi Cola. Today you can relax and enjoy a Pepsi Cola at the recreated soda fountain and purchase a souvenir.

Bank of the Arts 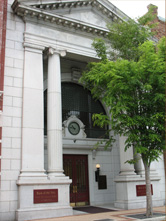 317 Middle Street, New Bern, North Carolina (252) 638-2577. This former bank building (c.1913), headquarters of the Craven Arts Council and Gallery, is both a cultural and an architectural treat. The Bank of the Arts changes exhibits of various media such as painting, sculpture, photography, pottery, and fiber art by artists of the southeastern United States are provided free of charge in the Bank of the Arts gallery area.

A Day at the Farm

Corner of New Street and Hancock Street, New Bern, North Carolina 514-4951. The New Bern Academy Museum building originally served as a school house for boys and girls, then served as a hospital in the Civil War and in 1881 became part of the New Bern Graded School System. Today there are four permanent exhibits: Early New Bern History, Historic Architecture of New Bern, Civil War and History of Education in New Bern. The Museum is open Monday through Saturday from 1:00pm until 4:00pm and admission is $2 for adults and $1 for students. 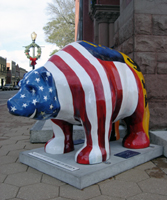 Bears are making tracks all over New Bern…decorated, fiberglass bears that is! Adored with hats, flags, flowers and other unusual and creative features, you will be delighted with each bear’s unique design. To coincide with New Bern’s 300th Anniversary Celebration in 2010, Bear Town Bears, a nonprofit organization, recruited local artists to implement hand-painted designs on life-size standing and walking fiberglass bears for public enjoyment during the entire year. Sponsors for the bears have placed their bears in historic downtown, as well as in outlying areas. The public is invited to enjoy their own “Bear Tracks Hunt” by picking up a free map from the New Bern/Craven County Convention & Visitors Center, the New Bern Chamber of Commerce and other supporting businesses. Children can participate by playing the game “Where on the Bear” to find hidden features on each bear using clues listed on the map. Track bears all over New Bern while enjoying the beauty of these public art sculptures in 2010!

408 Hancock Street, New Bern, North Carolina (252) 636-4087. The Firemen’s Museum houses steam pumpers and an extensive collection of early fire-fighting equipment along with rare photographs, Civil War relics, and even the mounted head of a faithful old fire-horse named Fred, who died while answering an alarm.

National Avenue, New Bern, North Carolina (252) 637-2912. The graves of brave soldiers who fought and died for our country make up the National Cemetery found in historic New Bern.

The Havelock Tourist Center, a multi-purpose meeting facility that can accommodate up to 600, features an aviation exhibit that highlights Marine Corps aviation in Eastern North Carolina. Four aircraft on loan from the United States Marine Corps and Department of the Navy will be on display, along with several static exhibits featuring local aviation “aces.” The Havelock Tourist Center Complex includes a waterfront park along Slocum Creek featuring a nature boardwalk and boat ramp.


Ghosts of New Bern
(Walking Tour) - Downtown New Bern, (252) 571-4766. New Bern is rich in history and heritage. Let the Ghosts of New Bern share some of the old city’s mysteries, myths and legends with you on an entertaining one-hour walking tour through the streets of the Historic District. Explore why New Bern is host to many unexplained happenings and unsolved mysteries. Do ghosts really haunt some of the city’s buildings and walk its streets? You be the judge! Tours start next door to Morgan’s Tavern & Grill (235 Craven St.). Check our website www.ghostsofnewbern.com for tour schedule, pricing, and special offers and events.


Tarheel Adventures Segway Tours
Join us for a 2-hour historical tour of the New Bern – North Carolina’s second oldest town, where everything old is new again. You will be provided with a wireless earpiece for our fully narrated Segway Tour. Glide by the scenic waterfront, Union Point Park, Tryon Palace, the Firemen’s Museum, Cedar Grove Cemetery and more. You can also request a special 1-hour Segway experience which showcases New Bern’s beautiful waterfront. You’ll spend the full hour gliding near water’s edge, taking in the scenic vistas and the gentle breeze. Advanced purchase required. Tours often sell out in advance. Get information, check availability and buy tickets at www.tarheeladventures.com or to purchase by phone call our ticketing company at (800) 979-3370. Come enjoy these unique tours with their guarantee of “The wind in your hair and a smile on your face.”


Randy’s Water Cars & Tug Boat Cruises
New Bern Grand Marina, (252) 349-3819. Enjoy a tug boat cruise along the beautiful Neuse and Trent Rivers. All cruises depart from the New Bern Grand Marina at the Hilton New Bern/Riverfront Hotel. Cruises are 2 hours in length for up to 6 passengers and $20 per person. Private charters, custom cruises and water taxi services are also available.

�  Regular Made Jams and Jellies